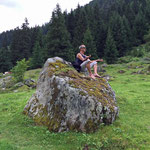 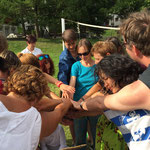 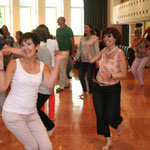 Yoga practice is not an end in itself, or even simply a means of "transcendence." It is a tool for being in our bodies and being with ourselves. In a simple way, yoga is about our relationship to our body and mind; this workshop will be about enhancing that relationship in can-do ways. That relationship will be handled in the very practical terms of its significance for our health on every level.

This will be an all-levels workshop on deepening these inner relationships, which will be informative to teachers and enlightening, encouraging and inspiring to students! Teachers will learn simple approaches to fundamental and powerful actions and practices for students, while continuing students will have a chance for a deep and direct experience!

At the center of all movement lies the sacrum, the keystone of the pelvis, which regulates the curve of the spine as well as the "openness" and flexibility of the hips. Much of yoga has focused on the suggested actions of the tailbone — even in describing "Mula Bandha" — but has given little attention to the natural actions of the sacrum.

On this first day we’ll focus on some simple actions to be incorporated into asana practice that will strengthen the muscles supporting the actions of the sacrum, increasing the stability of the sacroiliac joint as well as the health of the low back and flexibility of the hips. The asana practice will focus on typical blocks we encounter in practice — "stuckness" from hamstring and hip tightness, as well as shoulder tightness and limitations — and will introduce alternative approaches to ‘getting into the pose.’ We’ll handle problems arising from imbalanced movement patterns in asana for both tight and hyper-flexible practitioners.

The afternoon will take the idea of sacral rhythm and connect it to the breath in pranayama. The philosophical theme will be "Spanda," and we will focus on experiencing this in meditation with awareness of the breath and bandhas in pranayama as a gateway into meditation. This will lead into Yoga Nidra as an even deeper experience of inwardness, allowing the process of meditation to take place.

A big challenge in practice and in life comes from the shoulders, which can be limited in movement as well as being easily injured. We will take a deep and natural approach to "shoulder opening," thinking of the action of the rotations of the arms as beginning from the spirals of the hands and wrists. We’ll incorporate wrist health and elbow awareness into the poses that challenge our shoulders (and neck!), and cover a range of poses including variations on backbending, in which there is often the complaint of a lack of strength.

The session will include helpful information about the shoulder — its structure and how it works in various arm positions, and how variations in the usual shoulder actions can be helpful for mobilizing the shoulders, with some remedial stretches as well!

And going beyond the shoulders, we will include the head and neck. Traditionally we think of the foundation of the body — in yoga and in our posture in life — in terms of the foundation set by the feet; but we can also look at freedom and spaciousness in posture and movement in terms of the placement and movement of the head upon the spine, with the maxim, “As above, so below.”

The guiding principle will be the yogic insights behind Jalandhara bandha for connecting with our center through the breath. We will focus on alignment and actions of the head and neck, combined with stabilization of the ‘Core,’ and connect that further to the Ujjayi breath and pranayama in the afternoon. This will include a subtler awareness of the throat and Ajna chakra in breath and meditation, and link that to the inner awareness of the Kundalini.

Sunday: The Core: Uddiyana Bandha — Stability in Poses and Strength in Pranayama

Sunday will tie together themes from the previous days, and link the theme of sacral rhythm to Uddiyana bandha to asana. Practices for awakening and strengthening the core will be a strong part of the asana practice, including twists and some work with inversions. This will also be carried forward into pranayama, with work in stronger pranayamas such as Bhastrika and Nadi Shodhana, focused on the connection between the sacrum, diaphragm and bandhas.

The philosophical theme will be how practices of the body support awakening the breath and Kundalini, and the deeper practices involving mudra, mantra and visualization take us deeper. And we will explore further the practice of Yoga Nidra.

Many of the deeper processes of meditative yoga having to do with reducing the power of "samskaras," undoing or rewriting emotional patterns that are often described in terms of "working on the chakras" and so on will be put in the context of "Laya" yoga as well as the power of deep sleep — and the relationship of "yogic" sleep to samadhi. We’ll consider variations on the approach to Yoga Nidra, and will practice a fundamental form that allows us to go even deeper than seated meditation — and is a helpful aid to addressing sleep problems.

Doug Keller’s background reflects a lifelong commitment to the vast field of yoga. After receiving degrees in philosophy from Georgetown and Fordham University and teaching philosophy at a college level, he pursued a practical experience of yoga at the ashram Gurudev Siddha Peeth in India — which in turn also led him to the practice of hatha yoga as part of his overall experience of yoga. From years of study, practice and teaching, he has produced widely used and highly respected books on asana, yoga as therapy, pranayama and yoga philosophy, and he teaches hatha yoga workshops and trainings in both North America and Europe. He was a regular columnist for Yoga International Magazine for three years, and has also written on therapeutic topics for Yoga Journal. His popularity as a teacher comes from his ability to deepen people’s experience of yoga through clear, simple and direct instructions that are easy to practice and remember. And he does it with lightness and light.